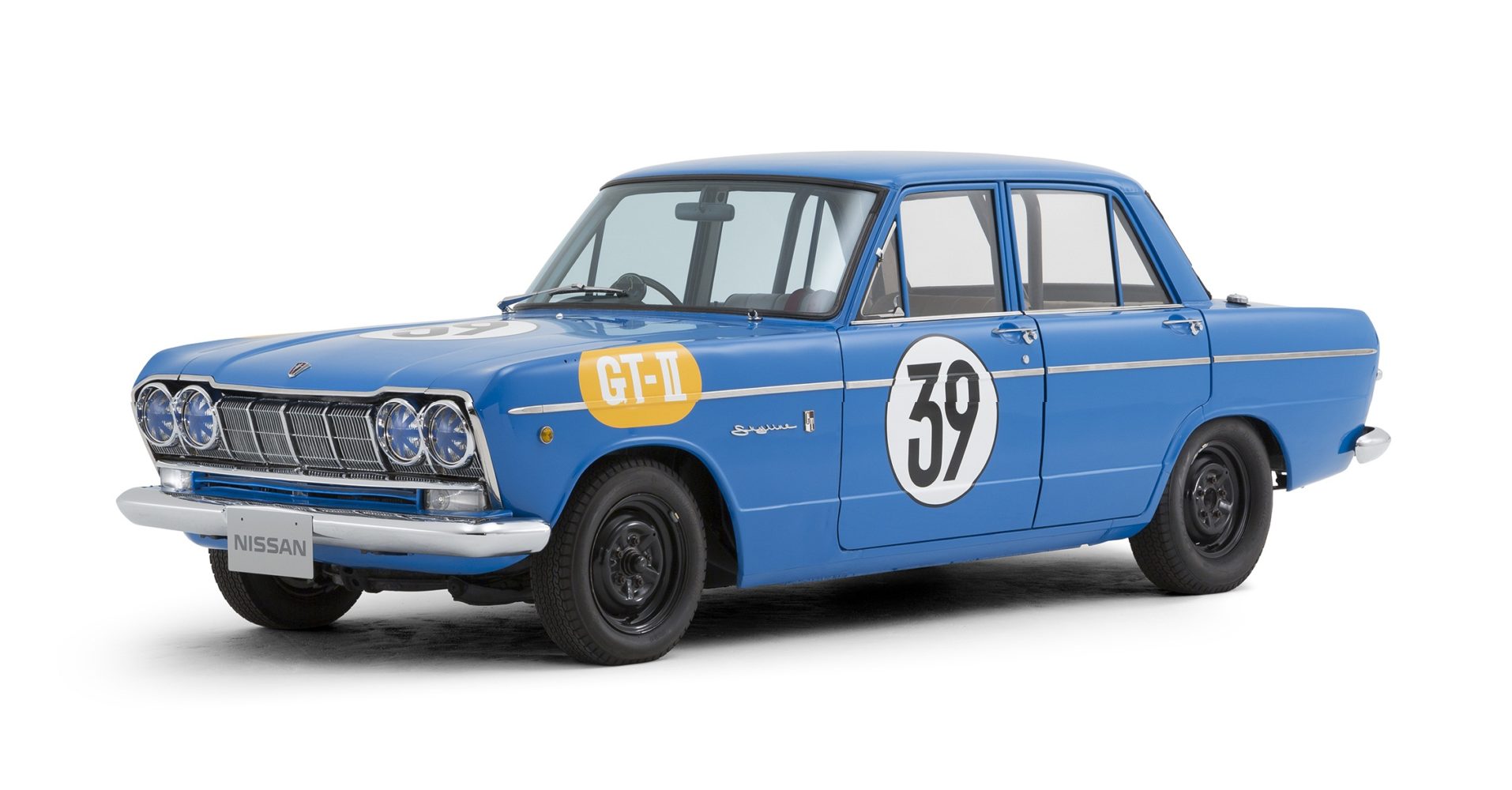 Today, mention “Nissan Skyline GT-R” to someone fascinated with racing, and chances are, one of the first things that will likely come to mind is staying up late playing Gran Turismo! In order to understand the GT-R and how it came to be, we’ll have to visit the tale of a famous race and the company which produced the cars that competed in it – the Prince Motor Company. This is the Second Post of a 2-Part Blog!

Shinichiro Sakurai and the Ogikubo boys went back to the drawing board in May of 1964 with their sights set on winning the Japan Grand Prix. By lengthening the nose of the S50 an additional 200mm, he and his team squeezed in the 1,988cc (2.0L) G-7 in-line six cylinder engine, which had been utilized in Prince’s flagship offering, the S41 Gloria. The G-7 was Japan’s first mass produced engine with a single overhead cam, as well. The S54-1 Skyline 2000 GT, the father of the Skyline GT-R, was born!

A major modification to the G-7 engine was made – the addition of three Weber 40 DCOE carburetors. Power, compared to the S50D-1, produced a maximum of 150PS at 6,800RPM, 176Nm of torque at 4,800RPM and a 9.3:1 compression ratio. Bore and stroke was square, at 75mm x 75mm. A five speed, close ratio transmission supplied by ZF of Germany and a limited slip differential were also added.

For braking, disc brakes with twin-piston calipers were mounted up front, and alloy finned drum brakes followed. Coinciding with Grand Prix homologation regulations, Sakurai and his team worked countless hours to produce the minimum of 100 cars, completing them a mere two days before the race. The S54B-2, better known as the Skyline 2000 GT-B, was released due to public demand in 1965. Like the race prepared S54-1, it also featured the same Weber setup, limited slip differential, and five speed manual transmission, with an optional four speed.

Accompanying the new GT-B was the S54A-2 GT-A, which was positioned as an entry level model. The GT-A featured the same G-7 engine, but in place of the triple Weber setup, a two barrel Nikki downdraft carburetor was offered. Power was sent to a four speed manual transmission and a standard differential. Front disc brakes were again available on both the GT-A and GT-B, like the S54-1, as well. Prince continued to use the G-7 in the S54-1, modifying it further by adding a crossflow head. This variant was known as the G7B-R, and was used only in this model.

Despite the S54, being driven by Yoshikazu Sunako, coming in second place to a Porsche 904 in 1965, those present went wild and took notice of Sakurai and his team’s hard work when Tetsu Ikuzawa, driving another S54, briefly overtook the Porsche during a single lap, ultimately coming in third. It therefore turned out that the poor weight distribution caused by the newly fitted engine allowed the car to drift in corners – thus becoming an advantage! For the first time in Japan’s racing history, a modified sedan proved its worth over a car specially designed and built for racing, thus giving birth to the legend that the Nissan Skyline GT-R is today.

This monumental event led Sakurai and his team to develop the Prince R380, with their sights again set on a victory. The R380 was developed specifically for racing unlike the S50 and S54. It used the chassis of the Brabham BT8 as its basis and featured the all new GR-8 engine along with a Hewland 5 speed manual transaxle. The GR-8 was mounted directly in front of the rear wheels, not unlike the Porsche 904. This new engine was also a first for Prince: it had four valves per cylinder with dual overhead camshafts, and three Weber 42 DCOE carburetors. The GR-8 was rated at 200PS at 8,400RPM and 172Nm of torque at 6,400RPM. The R380 famously won first place at the Japan Grand Prix in 1966, again being driven by Yoshikazu Sunako, and Prince finally secured a GT-II victory.

That same year, Prince Motor Company and Nissan Motor Company merged, and all Prince models were eventually absorbed into Nissan’s model lineup, which included the Skyline. Shinichiro Sakurai and many of his team went on to work for Nissan, developing the S54 GT-B’s successor, the 1969 PGC-10 Skyline GT-R, affectionately nicknamed the “hakosuka” or “Box Skyline” – hako (ハコ) meaning “box” and suka (スカ) being short for “Skyline” – by those that came to cherish it. Due to the merger, however, this all new design wore Nissan badges. In the vein of the Skyline Sport, a coupe followed the following year, bearing the chassis code KPGC-10. The Nissan S20 engine that powered the GT-R was directly inspired by Prince’s GR-8 engine found in the R380. The 1,989cc (2.0L) S20 would have dual overhead camshafts like the GR-8, with four valves per cylinder and an aluminum head. This engine produced 150PS at 7,000RPM and 177Nm at 6,000RPM of torque – impressive numbers for a production Japanese car for the era. The GT-R wound up an immense success on racing circuits, claiming multiple victories, and therefore paved the road for the legend the Skyline is today.

The Prince Skyline, and those that developed and raced them, were crucial to the birth of the Nissan Skyline GT-R. The GT-R was pivotal in Nissan’s success throughout the second half of the 1960s and a half a century later – on the track and off!